Got a haircut today. I’ve been complaining about how my hair had been getting in my eyes for weeks; it was starting to annoy everyone around me, I think. The complaining, that is, not my hair.

The barber didn’t believe me at first when I said how short I wanted it. “½ inch, you mean cut off that much or leave that much? Are you sure?” I acquiesced to start with ¾ inch left, but ended up taking it all the way down. My roommate said she barely recognized me when she saw me again.

The beard is gone now, too. It was getting past the point of striking and closer to unkempt and I didn’t want to put in the work making it presentable.

It’s been six weeks, give or take, since my breakup.

We met at the Speed Dating event I wrote about. She was, indeed, one of my two matches, and she emailed me, breaking through my passivity. We dated, we made out, we slept over, all of it entirely novel to me, the entire experience of dating. Not dating in New York, or dating in your 20s, or anything like that, like so many Thought Catalog or Buzzfeed articles want to try and segment human experience into. No, I had literally never had a girlfriend before, and was terrified.

She worked at a publisher downtown and was pretty and smart and mildly sardonic and a great, wonderful person, whom I was convinced for the entire time we were dating that I did not deserve to spend time with.

We were very good at picking each other’s cards while drunkenly playing Cards Against Humanity on New Year’s Eve.

It’s so enjoyable to just talk with someone about your day. We don’t have that intimacy much outside of relationships, the guard-down, let-me-please-just-think-out-loud conversation.

I learned that anxiety is not your friend in certain circumstances.

We were, in retrospect, somewhat awful about talking what we needed from each other emotionally. Of course, I suppose I still don’t know what I really want, which makes it hard to ask for, and tried to gloss over it when it came up.

The day before she broke up with me, we had this text message exchange: 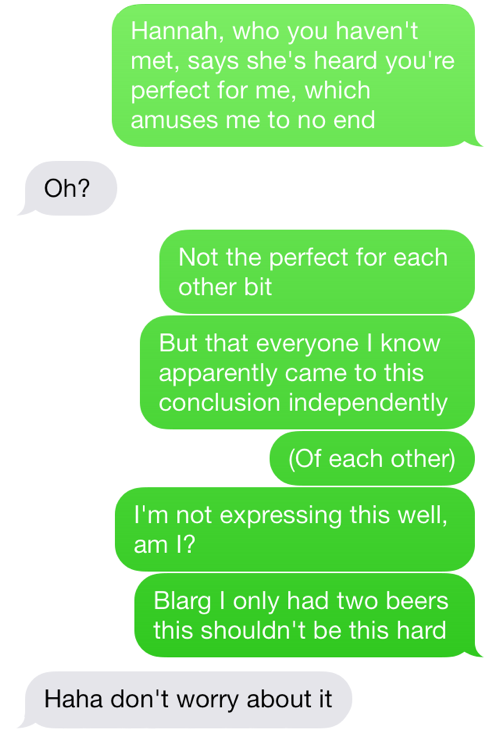 We joked about this during the actual breakup conversation. At least, I tried to tell something resembling a joke about it. I was texted this to her as a “look at how silly my friends are, saying these things without even having met you,” but to have her actually dump the next day was, well, you couldn’t script that. Reading it again, now, though, with fresh and sober eyes – it seems a little pathetic, too. Who was I trying to convince?

Hannah, by the way, doesn’t remember saying this at all.

So I’ve been on OK Cupid again.

And why not? It gives me something to gossip about with the single woman I share workspace with. She shares her awful inbound messages with me, and I talk about the frustrations of going on two good long dates and then nothing, and we both feel better.

But, well, I don’t know. It feels very hollow, suddenly, in a way it didn’t six months ago. Perhaps this is just seasonal, the cold and the snow lowering my ability to care all that much in leaving the apartment. Tonight, for example, I could probably be out somewhere with friends, but instead I’m here, writing the sad-twenty-something-male blog-post version of “women-processing-their-shit books.” Because, you know, the internet needs more of that. 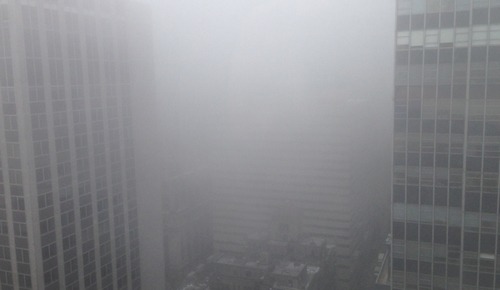 It just seems like everyone is waiting for spring.