…OK, click-bait headline out of the way.

What do I mean, the Internet sucks?

Consider what the internet was like a decade ago. I know, this is hard for many people. Look, here’s Blodget pontificating about how the Internet was here to stay after the dot-com bust!

Sites were much more concretely split between personal homes on the internet and corporate outposts. Facebook was new, flickr was just getting off the ground. It was a lot smaller – 50 million sites. Today there’s nearly a billion.

What’s powering that huge growth? Outside of the pure fact that the internet is a lot more global now, and there’s simply more people out there to make a website targeting, anyway? In my opinion – and I don’t really have any true evidence to back this up – in the last few years it’s the growth of super-SEO ‘content’ sites.

You know the type. You see them listed at the bottom of seemingly every article on the internet these days: 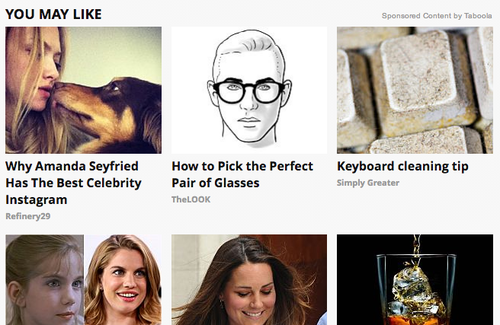 They’re not blogs, not really. They’re not news sites – they just republish news from other places, never breaking anything. They’re not opinion sites. They’re just… “publishers”. Of “content”.

They place a premium on consistent posting that has lots of advertiser-friendly keywords so that Google will rate them highly and that AdWords campaigns will appear next to their articles.

I’m reminded of an xkcd comic about captchas:

We’ve reached the point on the internet where there’s enough of an economic incentive around AdWords that most of the sites out there are tailoring their entire existence around performing well for the AdWords algorithms, and what are known as Panda updates to the Google spidering algorithms.

Google has opinions about what makes a “high-quality site”, and these are all well-and-good. But simply by existing at the scale it does, Google is no longer a neutral third-party examining the web – it actively warps the fabric of the universe, causing entire ecosystems of “content sites” to exist that never would otherwise.

A personal note: I went on a date with a woman who worked at one of these sites, and she explained her day to me. It consisted almost entirely of trawling for articles on other, more reputable sites, writing short paragraphs around the link, and then publishing ten of those a day, along with at least one slideshow, built mainly out of AP and Getty-sourced images. The only reason the site could exist, had any reason to exist, was because they could get enough google-juice from mutual links from other, similar sites to support their AdWords.

The site, even though it’s generating shell ‘content’, basically contributes nothing to the betterment of the internet. Not one new piece of knowledge is added to the world, or interesting personal statement. It’s just links and advertisements, all the way down.

This doesn’t mean I think Matt Cutts is an evil mastermind out to destroy the web – far from it! I think he wants a better internet. But Google has created, through their quasi-monopolistic control over the search and automated-ad-placement industries on the internet, a perverse incentive for shitty, shitty websites to proliferate and thrive, resulting in garbage like luufy.com, which I stumbled upon today:

…which also runs a network of knock-off twitter bots based on memes and authors that retweet each other’s links to luufy.com posts: @luufycom @asdgrumpy @tylrsftlyrics @nietzzzsche, which is as close to bad-actor status as you can get and not just be one of the random-character spambots that show up in my mentions from time to time.

I was hoping to close on a positive note, but I don’t think there really is one here. Until someone else breaks the stranglehold of AdWords, we’re stuck with this grey mush of “content” drowning out the voices of individuals, which is what I miss. So instead, let’s close out with DJ Shadow’s Why Hip-Hop Sucks in ‘96: