I’ve been playing through Pokémon Sword the last two weeks or so. It’s… fine. A little disappointing. The internet definitely thinks it’s 2019’s most controversial release; every tweet from the official Pokémon twitter account is mass-replied to with people carping about the lack of the National Pokédex (that is, not all previous pokémon are included in the game). 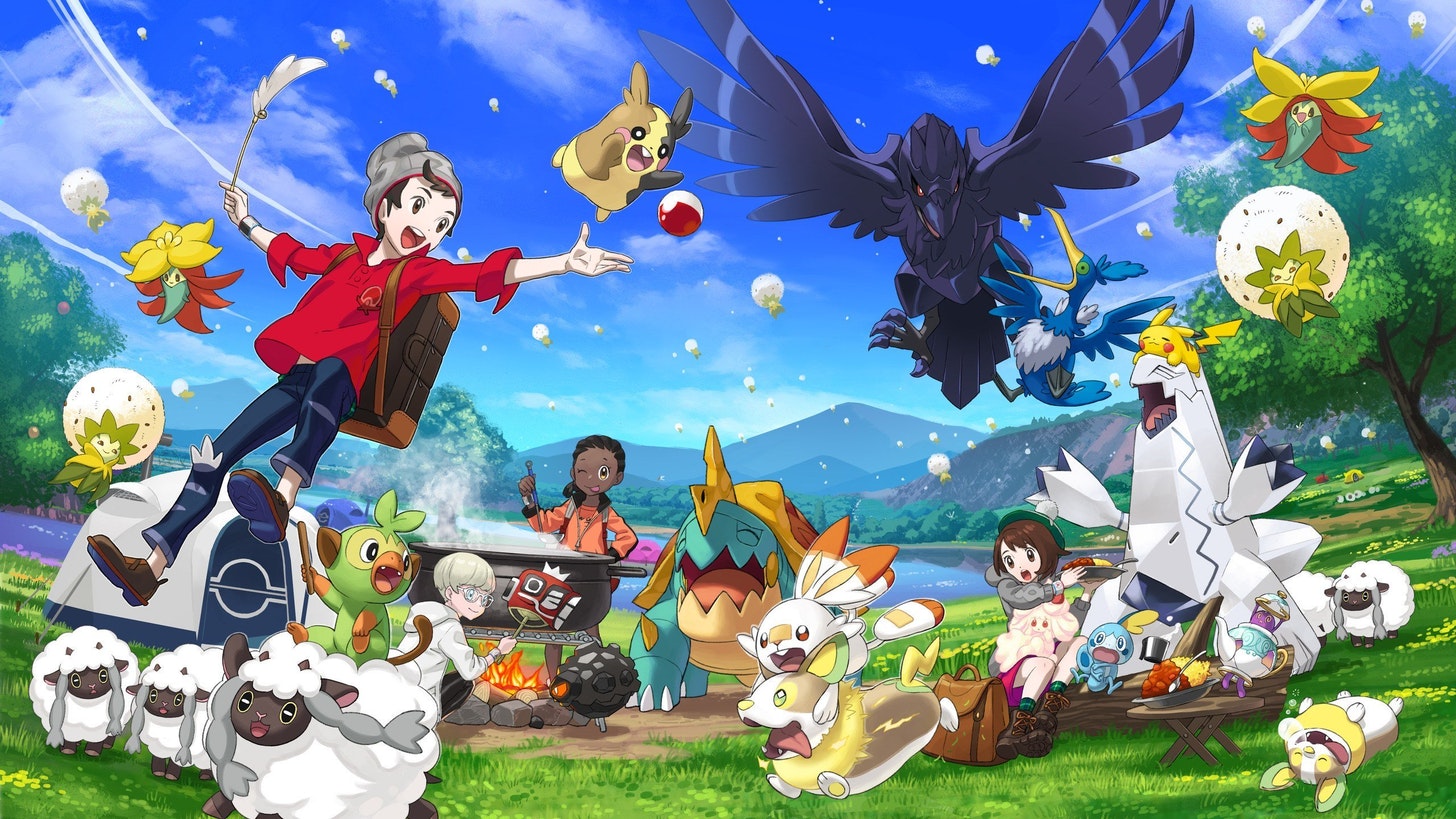 It definitely has weaknesses. Camping feels half-baked and unimportant; the Wild Area is a great idea with lackluster execution; Galar’s cities suffer from the same lack of scale that previous games did. (Where do all these people who fill the stadiums and watch you battle live?) But it’s a solid execution of a familiar playbook. Marnie is well-written, Bede’s weirdness feels earned, and the low-stakes annoyance of Team Yell is a nice return to the crime-syndicate local-scale concerns against the literal world-ending evildoer plots of some previous games.

With Sun and Moon on the 3DS, the series ditched the eight-gym structure for a more free-form coming-of-age challenge for the protagonist, and a plot-heavy family saga with the Aether Foundation at its center. Critics praised the change-up but complained about the linearity of the plot.

In Sword and Shield, gyms are back, embedded in a storyline focused on the celebrity culture built up around the Galar region’s (which is just England with the serial numbers filed off) Gym Challenge. There’s the hint of something interesting here, but there’s no real commentary on sports fandom or celebrity culture at all, which seems like a real missed opportunity, especially since English tabloid culture is well-known for its toxicity!

I can somewhat understand where the #BringBackNationalDex people are coming from, even if their passion is wildly misguided. On one level, it seems crazy that 400 pokémon isn’t enough for people — who cares if Pidgey isn’t in the game? There’s Rookidee and Pidove, two perfectly acceptable two-evolution bird species right there… but they’re not my Pidgeotto, the one that fought off Lance’s Dragonite blow-for-blow in Pokémon Red when I was twelve years old…

To me, video games are machines for generating narratives. (I suppose this places me squarely on the Narratology side of the rather artificial “Ludology” vs “Narratology” divide.) And while every Pokémon game has a surface narrative, usually around beating the eight gym leaders, defeating some evil Team, and proving yourself as the Champion for the region, that rote and predictable plot isn’t what draws people back to Pokémon over and over again.

In my experience, players draw important narratives out of the push-and-pull of individual battles, of the struggle to fill up the Pokédex with those last few rare pokémon, imbuing every single roll of the RNG with meaning. Catching Mewtwo with a Great Ball after using up all of your Ultra Balls and down to one last Pokémon isn’t “a lucky coin flip following a bunch of unlucky ones” but “a narrow victory, with skill and perseverance rewarded”.

My friends and I played a lot of Pokémon Red and Blue growing up. At one point, we were batch restarting and ripping through the first part of the game up until the point where Bill gives you your Eevee, so that we could immediately trade it out of the game into one that had almost finished its Pokédex and get the last few Eeveelutions. To facilitate this, we’d trade a high-level pokémon into the donor game to make the initial run easy. One of the ways that the game tries to gate this behavior is by making it so that overly-leveled pokémon would become disobedient of a low-badge-count trainer.

At one point, the Charizard we’d traded into the donor game was simply refusing to follow any of the player’s commands, which was seriously slowing things down. We passed the Game Boy over to the owner of the original game, and watched in amazement as the Charizard immediately ripped off a sequence of attacks exactly as instructed.

Even at the time, we knew it was random, happenstance, there was no way that the game knew who was pushing the buttons. But the RNG gave us a narrative in that moment, and we believed it. Charizard knew who was out there, and obeyed his trainer.

We’ve been playing the same game, more or less, since Pokémon Gold and Silver, where most of the now-standard elements of the series came together: the day/night cycle, genders and pokémon breeding, the ever-expanding pokédex, berries, and a hunt for a mythical pokémon. There’s been some tinkering around the edges, with things like Mega Evolutions or Sword/Shield’s Dynamax temporary transformations, but the standard mechanics and expectations are pretty much set in stone.

What The Legend of Zelda: Breath of the Wild did that prompts such a reverential air was its willingness to examine every trope in Zelda games, try and find what the core draw of it was, and then imagine it from the ground-up for a new generation of players and technology. (Sounds easy, right?) Previous Zelda games had been non-linear, had been open(-ish) world, had encouraged exploration and experimentation… and BOTW kept the framework of the conflict between Ganon, Link, and Zelda as a backbone. It helps that the franchise was always willing to throw out the playbook; Wind Waker looks and plays nothing like A Link To The Past, and each was designed not to repeat the “Zelda formula” but to try and build an interesting game, given the limits of the console in question, inside the narrative framework of the series.

What would a back-to-basics rethink look like for Pokémon?

At the risk of stating the obvious, the core of Pokémon is catching pokémon and battling pokémon, with the goal of proving yourself the Best and filling your Pokédex to 100%. Everything else — gyms, evil Teams, numbered Routes, other trainers — all of that is cruft that’s built up around the simple core feedback loop of the game: catch pokémon. Beat other pokémon. Repeat until you’ve Caught Them All.

Imagine Pokémon on an uncharted continent.

You arrive on a boat to a small port town. There’s a Pokémon Center, a small store selling Potions and Pokéballs, a few tough-looking sailors, and the colonial authorities, looking for hardy souls to go out into this strange new land and fill out a “Pokédex,” handed to you by a Professor. You’ve brought your own trusty Pokémon from home, of course, but only one, and it’s pretty young and you’ll need to do some training as you go. We’re leaning into the problem of filling large cities with interesting things on every street-corner by just not having large cities.

The terrain outside your little output is rugged. There aren’t any good routes around yet, although some other small settlements have been set up. Weather rolls across the huge, open continent in visible fronts, with rain transitioning to hail at higher altitudes. Apricorns and Berrys are plentiful, which is good, since supplies are hard to come by. You’ll be making your own Pokéballs and potions from what you can forage, and camping overnight with your team, making curries and sitting around the fire, hoping no wild pokémon decide to trample your tent overnight.

Wild pokémon travel in herds, with common ones traveling in homogeneous packs. Looking for a Pidgey? You’ll find them in spades in one particular forest, but nowhere else. There’s a little colony of Sawks on the side of a particular mountain. (Rattata can be found literally anywhere, of course.)

To start, you can’t cross any of the rivers you come encounter. For that, you’ll need to prove yourself to a fellow explorer who can teach your pokémon how to ford any river… if you can beat his team. Same for the trainer who can give you a set of cliff-climbing equipment… if you come out on top. And of course the trainer who can teach your pokémon to fly needs you to help him out with tracking down a rare bird pokémon he saw atop a mountain…

As you open up more and more of the wilderness, the little port town grows a little, with more people moving in and more resources becoming available. Maybe that merchant starts carrying Ultra Balls. No other settlements really get going, though; settling a continent is long, hard work. And it’s not always a smooth progression for you, either; wander into the wrong canyon too early in the game and suddenly your little band of level twenty upstarts are facing off against a level sixty Aggron and taking bruising damage as you make a run for it.

You run into fellow explorers out there as well, always around the same strength as you and your team, always changing up after you beat them, never in the same place twice. Some of them become familiar faces, who you run into in cave after cave; others pop up once and never return. Perhaps the wilds got to them; maybe they just gave up and went home. Don’t over-explain it. Let the player build the narrative with you.

Eventually, you make your way further and further inland, encountering strange, ancient ruins, with walls covered with murals of strange pokémon. There’s something legendary buried down in these walls, and you’re going to be the one to awaken it… and with it, claim your title as Champion.